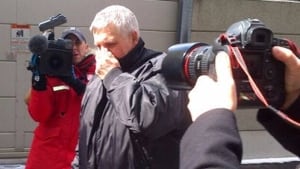 Gordon Stuckless faces an additional 70 charges and police believe there may be more victims. (CBC)

The man at the centre of the Maple Leaf Gardens sex abuse scandal is now facing more than 70 criminal charges after more men came forward alleging they were abused in their youth.

Gordon Stuckless, 64, turned himself in Tuesday to York Regional Police, who laid a total of 23 new charges of indecent assault on a male, sexual assault and gross indecency against him.

Stuckless was convicted in 1997 for sex assaults on 24 boys while he was an usher at Toronto’s Maple Leaf Gardens between 1969 and 1988.

In the past year several more men have come forward to allege Stuckless abused them decades ago, leading to the fresh wave of charges.

Police believe there may be more alleged victims out there and are urging them to come forward.

The newest allegations from York Region date back about 30 years, and police said Stuckless was in contact with boys at schools and through minor sports in the same time period in Toronto and Thornhill and Oak Ridges, both north of Toronto.

Stuckless is facing 38 charges relating to 10 complainants in Toronto and another 34 charges from York Region, north of Toronto, where seven men have made complaints against him. The charges are for alleged offences between the 1960s and 1985.

Stuckless is set to appear in court Thursday in Toronto, where all of the charges from both regions are being tried together.

He has not yet entered a plea on any of those charges. His lawyer, Ari Goldkind, was not immediately available for comment.

Toronto Police have alleged Stuckless would befriend boys between eight and 12 years old and sexually assault them at various locations around Toronto and north of the city.

The first set of charges from York Region relates to a man alleging that Stuckless abused him in the early 1980s when he was the 12-year-old’s hockey coach, as well as a man alleging Stuckless sexually assaulted him from 1983 to 1985, when he was 11 years old and Stuckless was a teacher’s assistant at his school.

Stuckless was originally sentenced to two years less a day for the Maple Leaf Gardens sex abuse scandal. That was later increased to five years and Stuckless was out on parole in 2001 after serving two-thirds of it.

At a previous court appearance last month Stuckless’s lawyer noted that none of the charges relate to his client’s conduct since he was released from prison.